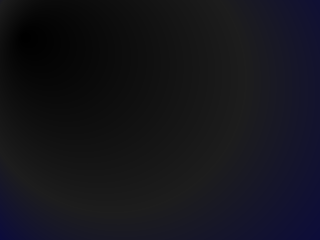 Darkness has engulfed us. Avid readers may have noticed that we've maintained strict radio silence over the last week. Truth be known, our dearth of communication hasn't been from lack of trying. Our power went out last Thursday, along with a million other people. The only difference between us and the other denizens of the Pacific northwest is that their power came on long ago.

Fortunately, our bodies have become acclimated to the near freezing temperatures in our house (this morning, it was actually colder inside the house than out). Friends and co-workers have mistakenly guessed that sleeping in a cold, dark cavern is the pinnacle of the problems. It's not. Boredom is the real issue.

Since Emily's school has been closed, she's become a permanent fixture in my office. Rather than justifying her presence by answering the two phone calls I get at work each day, she's had a wonderful time catching up on Grey's Anatomy. As much as I love work (I truly do), it's been hard to focus with her having such a good time a mere 2 feet away.

At any rate, happiness is... the 18 utility trucks parked outside of the Duvall Safeway this morning (I saw plates from Indiana, Alambana, and California). The power is coming. I can feel it.
Posted by Bryan at 11:33 AM No comments: 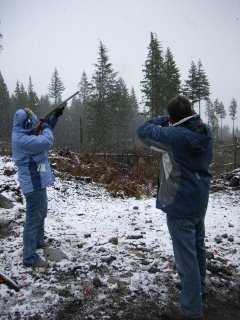 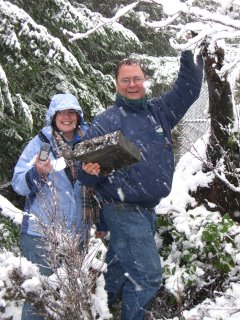 I'm going to venture out on a limb here and say that our thanksgiving traditions are decidedly nontraditional. While most families were basking in the glow of large screen TVs, I loaded everyone who wasn't on cooking duty into Emily's 4runner and headed straight for dangerous, snow covered mud roads. Since I had recently learned that target shooting was a perfectly legitimate use of national forest lands, we threw several hundred rounds of shotgun shells and a couple of boxes of clay pigeons in the back of the car to amuse ourselves at a later point in time.

Unfortunately, we ran out of clay pigeons before we ran out of time--I had promised Emily that I would keep people out of her kitchen until at least 2:30 PM. I did, however, have sufficient foresight to bring along the GPS. Cindy was all too happy to get out of the heavy snowstorm and go for a ride in search of a geocache. Remarkably, and in spite of all the snow, we found the geocache hidden in an ammunition box within a stump. James promptly left some Pfizer promotional materials.
Posted by Bryan at 5:57 PM No comments: 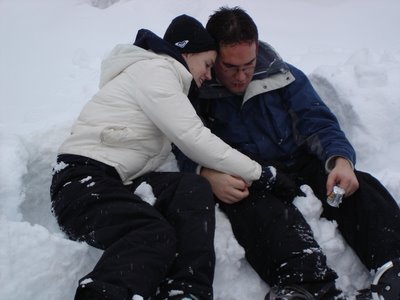 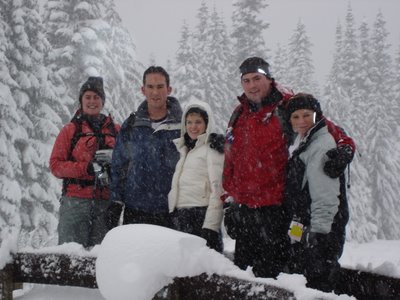 as it turns out, we were in for quite the weather treat when we relocated to the beautiful pacific northwest. this november has been the wettest month since december 1933. and, for all you smarties out there, what does wetness do when it is engulfed by sub arctic temperatures (also a weather novelty for this year)? it freezes.

thus, school has been closed for the past two days due to treacherous driving conditions. microsoft closes for no one--no, not even mother nature. how else is bill to get his billions?

meteorology aside, we have just finished entertaining the wheeler clan for thanksgiving. this year's lessons learned: we should return to plain white mashed potatoes and no more cheesecake. we also learned that i beat everyone at bowling (with my special chicken dance) and cindy washes a mean dish (take that, grant!). and when bryan drug us out into the snow blown wilderness in search of another one of his geo caches (which, for morale's sake, we FINALLY found) we learned that snowshoeing can actually be quite hard (shout out to all our troopers!)

plus, for those of you who may be unaware, butter becomes a raging flame when left in an oven with temperatures excessive of 400 degrees fahrenheit. always keep the baking soda close by.
Posted by Emily at 10:52 AM No comments: 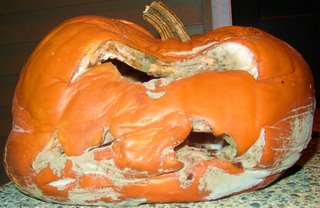 Emily's been pressuring me to get rid of the pumpkin goo on our front step. My goal has been to make it last until James comes for a visit (unfortunately, this is directly at odds with emily's goal of cleaning up the pumpkin goo before anyone comes for a visit). I was hoping it would remind him of the night when, with the suggestion of an older brother, he decided he would like to try his hand at pumpkin smashing. Given that the night in question was a good deal after Halloween, the two brothers should have realized that any pumpkins still remaining on doorsteps would have already turned into a pile of slime and mold. Alas, the follies of youth.
Posted by Bryan at 5:13 PM No comments:

cry me a river 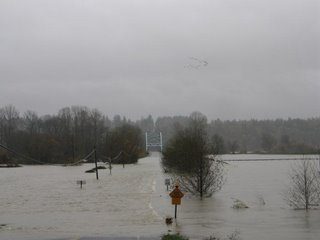 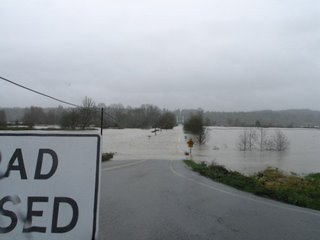 so after months of waiting for this alleged "wet" weather that plagues the pacific northwest to begin, the sky has finally opened her fury...and it has been raining for over a week. really, really raining.

two days ago, as bryan and i were leaving for work in the morning, we discovered that the road we usually take out of duvall was flooded (please note pictures above). however, we also discovered that an alternate route was still available, and being the smart cookies we are, we took it. only to discover several hours later--while still at work--that all the roads in and out of duvall were closed due to flooding (there are only three). alas, we had been clever enough to get out, not thinking about how we would then get back in.

so we didn't. we actually enjoyed a mini-vacation at the marriott in downtown bellevue. i purchased shirts for each of us so that we wouldn't go back to work in entirely the same outfits (everyone has different priorities), we ate out, watched tv, and i finished my report cards.

it still hasn't stopped raining.
Posted by Emily at 9:41 AM No comments: 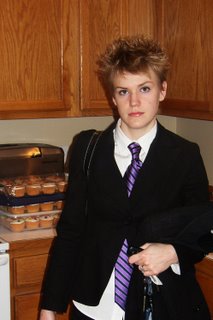 Emily has a long standing tradtion of wearing a necktie one day per year. This year, tie day fell on Halloween. It was probably because career day fell on Halloween as well. I think the school district figured out it couldn't prevent kids from wearing costumes, but at the same didn't couldn't appear like it was supporting a religious holiday.

In case you were wondering, religious holiday is a bit redundant, since holiday likely derived from "holy day." At any rate, Emily and I were shocked to discover that many people strongly believe that Halloween is fundamentally more than sinister trick-or-treaters and late night pumpkin smashers.
Posted by Bryan at 7:53 PM No comments: 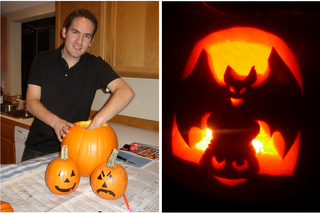 it is our goal (and when i say "our," i mean "my") this year to participate in more holiday traditions. to kick off, we bought our own fireworks in july (and then were sorely shown up by all of our neighbors who must have saved for their pyrotechnic displays for months). since that terrible understatement, our lives have been pretty devoid of special occasions.

but the holiday we owe to the Celts, All-hallow-even, is upon us.

here is bryan cleaning out the pumpkin guts. an impressive feat given his disdain for organic ickiness. but it was all he could contribute as the lefthandedness doesn't lend itself well to carving.

i think we did fairly well for our first time.
Posted by Emily at 5:02 PM No comments:

Do you remember what you were doing on April 20th, 1999? I do. Owen Young, Mark Taylor, and myself were at a gas station in Bellevue, Washington. Some punk kid asked us if we wanted some weed. We politely declined.

To us, the little road trip to Washington was an epic adventure. When we planned the trip, I seriously believed Owen just wanted to do some serious riding in the Pacific Northwest. It didn't even cross my mind that his girlfriend was from the area and it would be the last time he would see her before spending two years as a missionary. Fortunately, Owen has always been a man of priorities. The girlfriend thing didn't interfere with the riding at all (in fact, girlfriend's mom even washed our muddy clothes at one point in time. Thank you, girlfriend's mom).

I receently revisited one of the trails we rode. Preston Railroad. It was just as good as I remembered. Halfway through the ride, I realized I was riding the same bike on the same trail that I rode 7 years ago. Unfortunately, my body isn't nearly as supple anymore. I decided on the spot to begin investigating full suspension bikes. It was as if the Bontrager had returned to give me one last good ride before entering retirement.

One highlight of the ride came at the end of a nasty, rooted section followed by a sharp switchback. I cleared the section with relative ease, but two riders waiting below the switch back gave me a node and said "Nice." For someone who hasn't done any serious riding in a very long time, it was rather gratifying.
Posted by Bryan at 8:28 PM 1 comment: 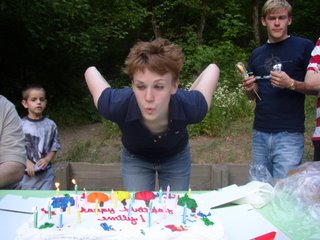 is it just me or does kenny always seem to have a fistful of candy?
his elixir of life.
Posted by Emily at 10:12 AM No comments: 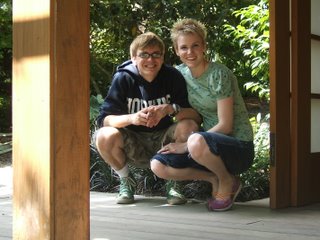 though it was wonderful to have the wheeler's around this weekend, we would be remiss if we were to not include a brief segment dedicated to our very first guest in the beautiful yellow room: matto.

here we are at the bellevue botanical gardens. for those who are to also invite him as their guest, we have a word of caution: matto is a touring machine. he's nonstop action, ready to get his money's worth out of every adventurous undertaking.

but some of us still need our naps in the afternoon and just aren't as young as we used to be. sorry, matt, next time we'll make it to the zoo.
Posted by Emily at 8:25 PM No comments:

From the other side 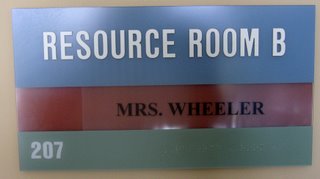 I saw this hanging on a door outside a classroom today. Tommorrow marks the first day of class for thousands of students throughout the Seattle area. It also marks the first day that Emily gets to use her college degree for its intended purpose. Generally speaking, I can't say that her students have been blessed with an overabundance of privilege, but I think both teacher and students stand to learn a great deal from the arrangement.

It was odd to see the sign on the door. It was a testament that some time over the last 4 years, we've made the transition into adulthood.
Posted by Bryan at 7:22 PM No comments: 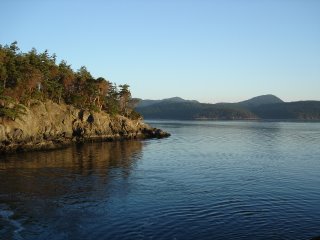 My parents were having a bit of trouble with Canadian customs. It seems that the Canadian government doesn't feel a great deal of expediency when it comes to renewing work permits (odd given the shortage of labor associated with the Calgary oil boom). Since their renewal didn't come in the mail before their permits' expiration dates, they had to leave the country for 24 hours and get their permits renewed on re-entry.

Because SEATAC is one of the closest airports to Calgary, they seized upon the opportunity to visit us over the three day weekend. On Saturday, we left at 4AM to catch a ferry from Anacortes to Friday Harbor. We spent the rest of the day on a whale watching vessel, chasing Orcas deep into Canadian waters, and cruising around the islands. Spectacular part of the world.

See more pictures at our Flick site
Posted by Bryan at 12:14 PM No comments: 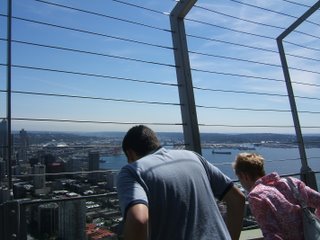 welcome to washington: forests, mountains, lakes, asian food--a veritable dream land for one, bryan wheeler. emily tags along on most adventures, though as of yet, she has not allowed him to eat much asian food.

here we are atop the seattle space needle. Note to the public: not worth the overpriced 41 second trip to its peak.